US House Passes Bill Banning Government Use of Dahua and Hikvision

John Honovich, IPVM [May 24, 2018] Today, the US House of Representatives passed H.R. 5515, a bill that includes a ban on the US government’s use of Dahua and Hikvision. This follows growing US awareness that Hikvision is owned and controlled by the Chinese government plus last year’s disclosure of Dahua’s backdoor, Hikvision’s backdoor and Dahua device’s global hacking attacks.

Bloomberg has also reported on this ban applying to Dahua and Hikvision.

The minimal impact is increased recognition and publicity of Chinese video surveillance manufacturer risks. If this becomes law in the next few months, the direct impact to Dahua and Hikvision would be moderate, as they primarily supply SMB based on low cost. However, Hikvision specifications have been increasing inside the US government (e.g., 1, 2, 3). Moreover, both Dahua and Hikvision are increasing their emphasis on enterprise and government sales with thermal cameras and AI.

The most significant impact might be indirect, as companies like ADT, Stanley, Tyco / JCI, Honeywell, UTC, etc. that OEM or resell Dahua and Hikvision may become nervous to be associated with government banned manufacturers. While SMBs typically care more about price than security, many are likely to be uncomfortable with a brand that the US government has deemed insecure.

The Dahua and Hikvision ban was added to the bill and adopted:

The other company mentioned, Hytera, is most closely a competitor to Motorola, now the owner of Avigilon. Motorola sued Hytera for IP theft in 2017.

The bill summary explained the rationale for these bans is for risky technology associated with the Chinese Communist Party:

The bill text explains the ban: 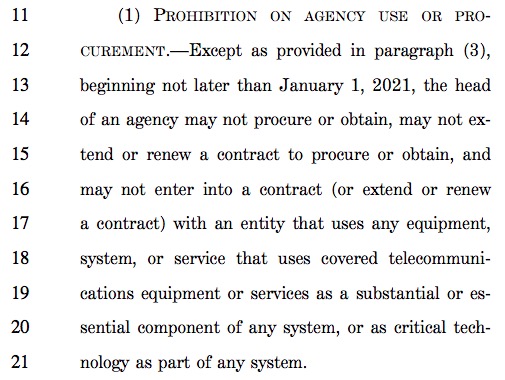 To read more of this article, please visit IPVM.